Tim Marsh is a dairy farmer along the dykeland in Poplar Grove.  Tim milks 90 Holsteins, has a heard size of around 200 and farms 750 acres of land of which almost 300 acres is dyke land.  Before taking over the family farm in 2000, Tim graduated from Acadia University and was a Geologist for a gypsum mining company. Tim’s passion for geology and soils is evident – Tim is currently the Chair of Nova Scotia Soils and Crop Association and was also a Nova Scotia Representative on the Soil Conservation Council of Canada.  Tim was one of the original Directors on the Board of Dairy Farmers of Nova Scotia and has served as the Chair of Hants County Federation of Agriculture. Tim enjoys spending time with family – he and his wife Shelley often take grandkids to search for agate in the Bay of Fundy. Tim has three sons: Tyler, who is now driving trucks, Peter, who is at home on the farm, and his son Craig farms on PEI.

“I was happy to take on a role with the Executive and give back to the industry that I love. Over the years this industry has given a lot to me and this is my chance to return the favour.”

Did you know that Tim and his family moved to Canada from England when he was just seven years old? Fulfilling their dream of owning their own property.

“One of the biggest things I’ve learned during my time on the Executive is about the other commodities in this province. For the majority of my farming career I was so focused on dairy and the dairy industry. It wasn’t until I joined the Executive that my eyes were opened to much more. Not only have my fellow Executive members taught me about their commodities, their farms and their issues – but so have our members. Talking and learning from everyone about their farms, their triumphs, and their challenges, has given me a better understanding. I love to learn and this gives me that opportunity.”

Want to get involved with the NSFA Executive? Click here to fill out a Committee Application form! 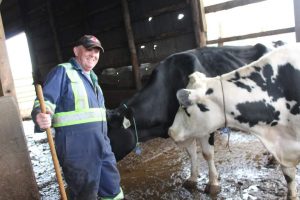