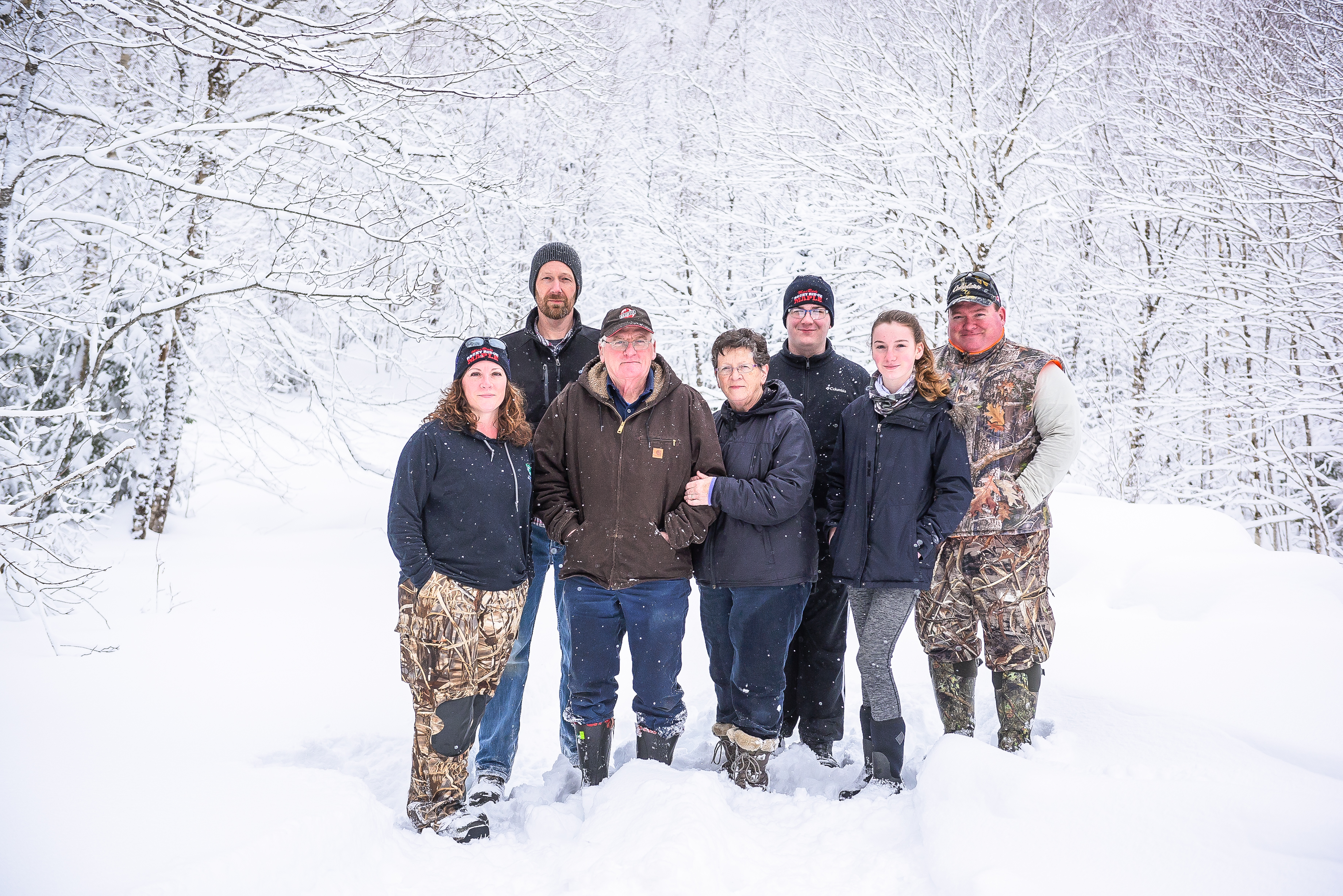 Maple in the Mountains 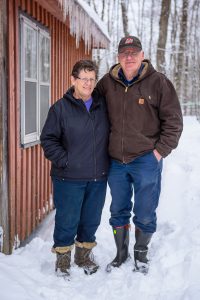 Perched on top of Nuttby Mountain in Nova Scotia’s Colchester County, lies a hundred-acre woodlot and MacRae’s Rocky Ridge Maple. What once started out as a family endeavour to collect enough maple syrup for themselves – has morphed into a retirement hobby for Alec and Gayle MacRae.

Growing up on either side of Nuttby Mountain – one in Upper North River, and the other in Earltown – both lived on mixed farms, not far from one another. Prior to retirement, Alec worked as an Ironworker and before having children, Gayle was a Stenographer with the Department of Agriculture. Once the kids were older, Gayle returned to the workforce as an Administrative Assistant with the Colchester East Hants Health Authority (now Nova Scotia Health Authority- Northern Zone) 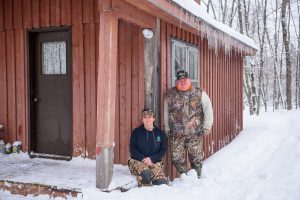 With almost 50 years of marriage under their belts, Alec and Gayle have two children, Elaine and Andrew, who help out on the family maple farm whenever they get the chance. Alongside them is Elaine’s husband Ryan and their two kids Shannon and Alexis. Elaine, graduated from Nova Scotia Agricultural College and is a Quality and Food Safety Specialist at Perennia Food and Agriculture, her husband Ryan is a Senior Web Designer with Nicom IT Solutions in Halifax, and Andrew graduated from Nova Scotia Agricultural College as well as North Carolina State University where he received both a Masters Degree and a Doctorate. Andrew works in North Eastern, U.S.A. as a Field Scientist with Dow AgroSciences.

“We love spending time in the woods and interacting with our fellow maple producers as well as customers – it keeps us active and social. Spending time with our family and being able to pass on the tradition to our grandchildren is fun as well.”

Into the Sugar Woods 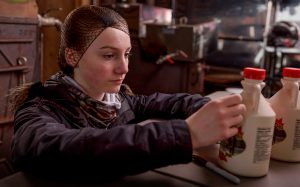 As members of the Maple Producers Association of Nova Scotia (MPANS) and Nova Scotia Federation of Agriculture (NSFA), the MacRae’s had an Environmental Farm Plan completed to help them access funding, as well as ensure they were incorporating environmental factors in order to keep their woodlot healthy. In addition to implementing an Environmental Farm Plan, they also follow the Best Management Practices outlined by Maple Producers of Nova Scotia which includes; production, food safety and packaging guidelines to producing a safe, quality product. Workplace safety is also important on their farm – although it is not required – they have a written and implemented Farm Health and Safety Policy in place.

Their advice to anyone looking to get into maple producing? 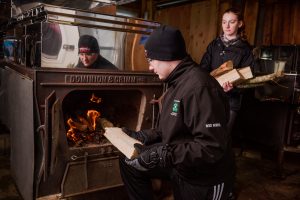 “Visit with a local maple producer and learn from them. If you are serious about going into production for yourself, become a member of MPANS – they have valuable educational sessions that will help you learn Best Management Practices for your sugar woods.”

Every year since their retirement Alec and Gayle have increased production by adding more taps.

What once started out as a few tapped trees with sap buckets on their woodlot has transformed into a much more extensive and modern operation. A new evaporator and a holding tank were installed in the existing sugar shack on the property, and the galvanized buckets and taps were replaced with news spiles and tubing. 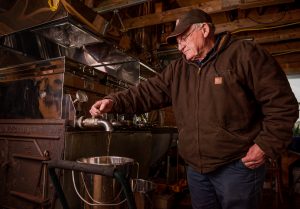 Did you know it takes roughly 40 litres of sap to make 1 litre of pure maple syrup?

During the summer months, sugar is made by the leaves and stored as starch in the root tissues of the maple trees. Fast forward a few months – to the supposed “end” of winter – the MacRae’s begin tapping trees. As spring approaches, the warmer temperatures sweet-talk the trees into turning the stored starch back into sugar, the sap is created by the trees as they mix ground water with the sugar. The freezing and thawing of the trees due to temperature fluctuations in the changing seasons, builds up pressure in the trees which causes the sap to flow from the tap holes. MacRae’s Rocky Ridge Maple uses the modern sap collecting process of taps connected by flexible plastic tubing that interlink – the sap from the lines is quickly drawn back to their releaser building using a vacuum pump.

In the beginning, the sap was gravity fed from the trees to the building, but a vacuum pump system was later installed, which has increased production. Once the sap reaches the releaser building on site, the sap is pumped from the building and run through filters on it’s way into the holding tanks. When the tanks are full, the sap is put through a Reverse Osmosis (RO) machine, which filters the sap again and takes a percentage of the water from the sap before boiling – this will shorten the processing time in the evaporator. 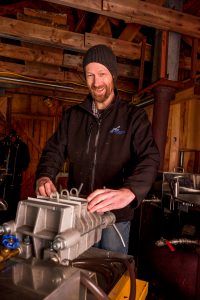 The MacRae’s run their maple farm as sustainable as possible, using the water removed in the RO machine to clean, and harvesting the wood for their evaporator by only cutting dead or dying trees from their woodlot, which in turn helps keep their sugar maple healthy.

After passing through the RO machine, the sap is boiled in the evaporator – which is fueled with wood from their woodlot. As the water in the sap evaporates, the sap thickens and is boiled until it reaches between 66% and 68% Brix, which is the sugar content of the syrup. After reaching the desired sugar content the syrup is put through a filter press to separate solids from liquids, and then bottled at a high heat to maintain quality.

The MacRae family package and sell syrup – as well as maple butter – both at the door of their North River home, and by bulk.

“We are gradually expanding our operation and fine tuning as we go so that the next generation can carry on our maple tradition.” 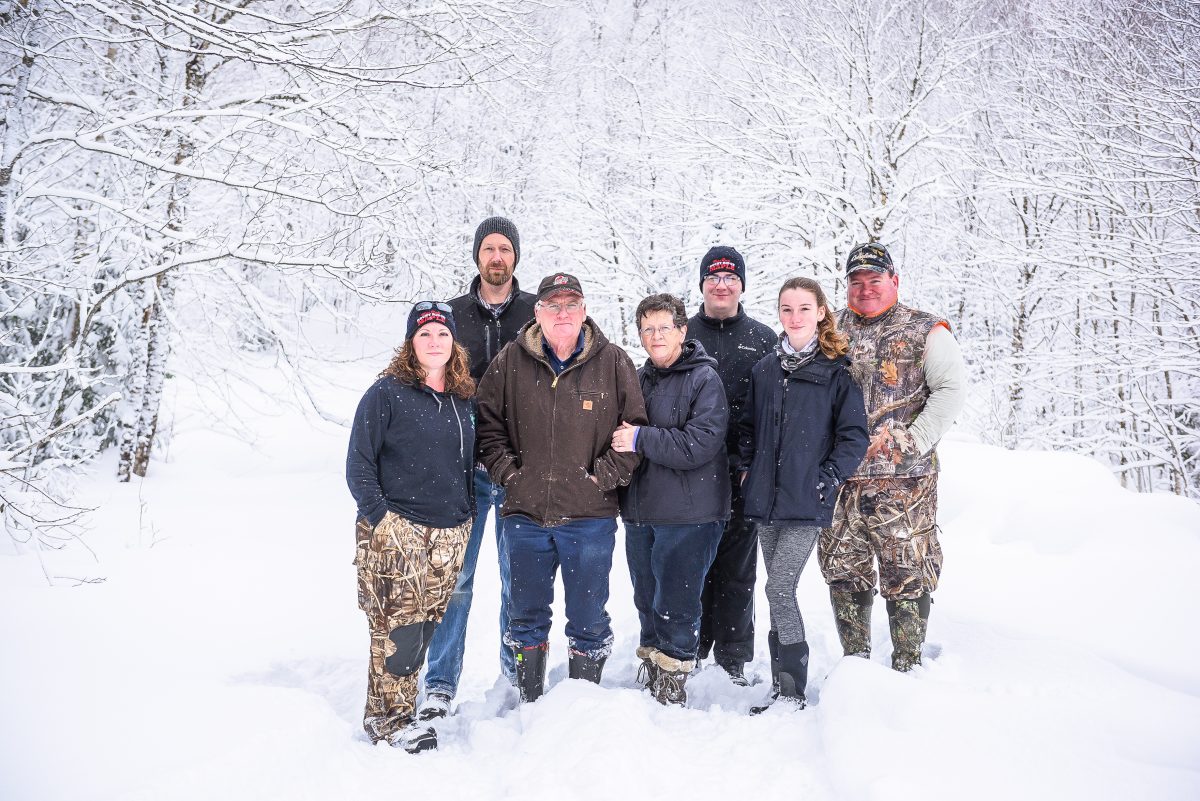