There are 4 council positions open and based on the five applications received 15 days prior to the AGM as outlined in the NSFA bylaws, there will be an election at the AGM to pick four of the following five nominees. 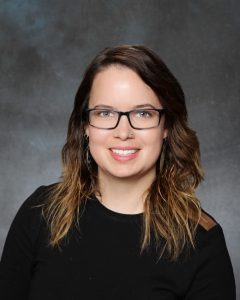 Lauren Park is a first generation farmer who has been working in agriculture for a decade. She is a beekeeper, specializing in queen bee rearing, in the Gaspereau Valley. In addition to her farm, Forest Hill Apiary, Lauren manages the 2000 hive Cosman and Whidden Honey farm specializing in fruit pollination and honey production.

Lauren is active in a cross section of agriculture organizations. Presently a member of the Nova Scotia Young Farmers Forum, Lauren is passionate about ensuring young farmers are educated and have a strong voice in the industry.  Lauren is also Past President of the Beekeepers Association of Nova Scotia and has been involved in key initiatives to ensure a sustainable beekeeping industry in the future. 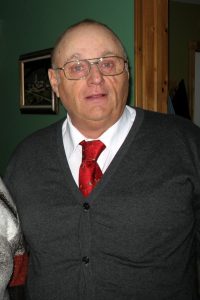 Gordon Jackson grew up on a mixed farm in Clarence.  In 1970, he purchased 8 grade cows and 160 lbs of dairy quota, and as a 4th generation farmer began milking cows on a farm in Clarence. In 1971, he married his high school sweetheart, Joyce and they moved to the farm, where they worked side by side until selling the farm in 2005 and moving to another. Together they have 2 daughters, Heather who works full-time in their office but lives in HRM, and Cheryl who lives in Ontario with her husband and 3 children. Their Christian faith is very important to them and helps to create a close family unit.

Throughout the years they improved the dairy farm and built a closed purebred herd of 80 cows and 80 heifers, which they sold in 2005.  In 1998, they began selling retail agricultural seed (Jackson Seed Sales Ltd.) and plan to wind down those sales in the next few years. Currently, they farm 750 acres, producing cash crops of corn, soybeans, small grains, straw, and forages; and also do custom work throughout the growing and harvesting seasons. Gordon is very interested in growing crops and trying new varieties of seeds and finding what grows the best.

During his farming career he has served on many agricultural boards and is currently serving on the Farm Technician Trade Advisory Committee.  Since helping a young farmer set up a 100-cow/100-calf beef farm in their community in 2012,  Gordon has been mentoring him and helping him become established.  He now farms 750 acres and is also Gordon’s employee.  Gordon is very interested in helping young people who want to farm, be successful in doing so. 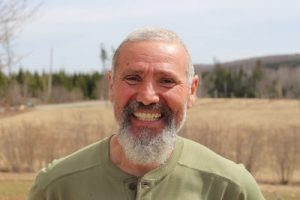 Before farming, Joe worked in the banking and investment banking industries for over 35 years in New England. Joe’s other agricultural service work includes being past president of the Haskap Growers Association of Nova Scotia (representing farmers in NS, NB and PEI), past chairman of Haskap Canada (representing farmers nationwide) and is currently president of the Haskap Marketing Group (a Co-op consisting of over two dozen farmers throughout the Maritimes).

Joe actively farms with his wife Stephanie, and two young children (Luke & Sadie).   The family feels blessed to be improving the land while producing nourishing agricultural products to help feed Nova Scotian families and contributing to food security in the region. 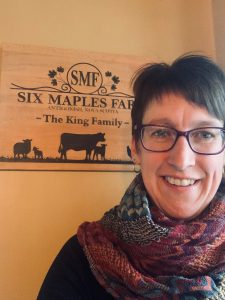 Alicia and her husband Danny operate Six Maples Farm in Antigonish County. Farming as a family, they direct market much of their product and also sell on the commodity markets – providing Alicia with a vast connection to varying levels of Nova Scotia agriculture. Alicia currently sits on the board for the Antigonish/Guysborough County Federation of Agriculture, the national committee for the Verified Beef Plus Program and is active with 4H committees both locally and provincially. In the past, Alicia has been involved with Nova Scotia and Canadian Young Farmers, Nova Scotia Cattle Producers and the Maritime Beef Council.

Alicia is interested in being appointed to NSFA Council so that she can promote and advocate for our industry within Nova Scotia, as well as nationally and internationally. 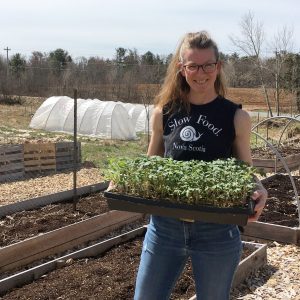 Jocelyn owns and operates Seven Acres Farm located in Canning, a small vegetable, cut flower and secondary product producing operation. She relocated to Nova Scotia from British Columbia in 2014 to start building her farm business. The majority of farm sales and activities are within the direct-sales, farmers market community in Nova Scotia. Jocelyn currently serves as Vice President on the Wolfville Farmers’ Market board, and has been actively involved in helping shape and launch the market’s online shopping and delivery platform, WFM2Go. She has also been a member of Slow Food Canada and previously sat on the board of the Tantallon Village Farmers’ Market.

In addition to being a small-scale, female farm owner and operator, Jocelyn is still a fairly “new” farmer. She did not grow up on or near farms but her interest in farming grew while she attended university studying food security and environmental sustainability.

Jocelyn is interested in being appointed to NSFA Council so that she can connect farms that may not currently be using their voices in this forum.